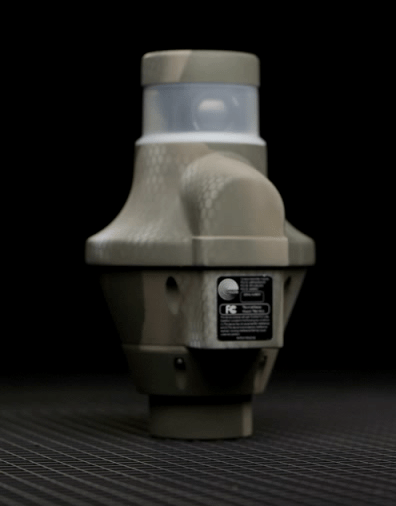 What is Thermal Radar?

Thermal Radar is an innovative, award-winning thermal vision device, which gives you 360° field of view, with high performance thermal camera and intelligent geographical information platform. Due to this, it provides outstanding surveillance and detection possibilities for end users.

With fixed Thermal Radar excellent quallity 360° rotating camera you are able to observe the field of interest and detect persons, vehicles, animals and thermal prints of fire in a panoramic view. This uniqe and stand-alone sentinel analisies the field of interest in range of 600m and alarm sin case of intruding, which can be forwarded via GSM, CDMA, WiFi or satellite.

Modern, affordable thermal camera system, which was inimagineable so far. Dozens of organisation are trying for so long to replace their traditional security cameras to expensive, but much more reliable thermal cameras. The Thermal Radar is cost-effective and provides a great opportunity to advance or replace security devices of your territory for instance, large floor place car parks, bridges, electricity generators, reservoirs.

16 cameras could be replaced by Thermal Radar with thermal sensor which has 6W energy consuption. Due to this, Thermal Radar is perfect solution for mobile sites, because of the low energy consuption, therefore it could maintained by solar panels. It is also applicable to secure critical infrastructures and far from populated areas.

A new and exiciting field of application, where the role of Thermal Radar is to control and observe traffic. The camera’s 360° field of view makes it possible to inspect a whole junciton at once. Therefore the control system of the juction only needs one camera to get signals that are needed for the controlling. These can be triggered by a moving vehicle or a person on the pedestrian crossing. The view of an individual camera and its intelligence can make up for the loop that detects vehicles, sensors of lane controller radars and the buttons for pedestrians.

Thermal Radar is also suitable for detecting and indicating forest fires. Installed with 10m height column and with appropriate settings, it is possible to detect a fire with 3m dimensionals in a 5km range.

Thermal Radar is a new approach of surveillance and detection which creates an outstanding philosophy. Places where security means installing dozens of cameras to keep real or virtual fences meghatározottunder watch, Thermal Radar is a way more cost effective solution in one device with 360° HD panoramic view. That one camera installed to the right spot is able to detect and realize numerous attempts of intruding.

The industry leading software platform of the camera is providing you a possibility to monitor attempt of intruding or follow up the intruder. The software immediately notifies users about intruding to the secured territory and forwards the alarms on the specified communication channels.

This website uses cookies to improve your experience while you navigate through the website. Out of these cookies, the cookies that are categorized as necessary are stored on your browser as they are essential for the working of basic functionalities of the website. We also use third-party cookies that help us analyze and understand how you use this website. These cookies will be stored in your browser only with your consent. You also have the option to opt-out of these cookies. But opting out of some of these cookies may have an effect on your browsing experience.
Necessary Always Enabled
Necessary cookies are absolutely essential for the website to function properly. This category only includes cookies that ensures basic functionalities and security features of the website. These cookies do not store any personal information.
Non-necessary
Any cookies that may not be particularly necessary for the website to function and is used specifically to collect user personal data via analytics, ads, other embedded contents are termed as non-necessary cookies. It is mandatory to procure user consent prior to running these cookies on your website.
SAVE & ACCEPT