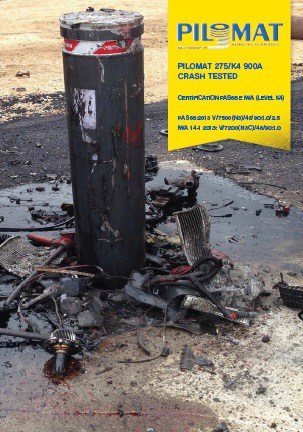 Test vehicle: the PILOMAT 275/K4 900A totaly immobilezed the test vehicle, causing serious damages on its undercarriage. The biggest impact on the vehicle was located on the driver side, which is 1 meter deep.

PILOMAT 275/K4 900A: the bollard had minor damages. The base of the bollard did not dislocated, but the bollard itself turned in 10° angle related to its axis in the dircetion of the vehicle’s movement. It stopped the test car successfully, despite of the impact the route still remained secured. PILOMAT 275/K4 900A was working properly after the hit.

Based on the results of the test the PILOMAT 275/K4 900A got the following certifications:

The datasheet of PILOMAT 275/K4 900A is available wihout any registrations on Orion 21 Ltd’s website. www.orion21.hu

The SecuScan® under vehicle monitoring system is providing an innovative solution to monitor the undercarrige of the vehicle searching for dangerous objects such as, weapons and explosives or drugs in an easy and fast way. Using this system significantly increases permeability of the access point. The SecuScan under vehicle monitoring system basicly consist of a scanner, a controlling workstaion and a traffic light. The mobile and surface mounted systems are available with rubber or aluminum ramps. The permanent system is made of stainless steel. The scanner is making a photo of the vehicle moving above, therefore it is possible to scan trucks even with trailers. It is able to scan vehicles with speed of 40km/h or below.

*the system compares the actual photo with a previously one, in case of difference it can cause alarm (ANPR is necessary)

This website uses cookies to improve your experience while you navigate through the website. Out of these cookies, the cookies that are categorized as necessary are stored on your browser as they are essential for the working of basic functionalities of the website. We also use third-party cookies that help us analyze and understand how you use this website. These cookies will be stored in your browser only with your consent. You also have the option to opt-out of these cookies. But opting out of some of these cookies may have an effect on your browsing experience.
Necessary Always Enabled
Necessary cookies are absolutely essential for the website to function properly. This category only includes cookies that ensures basic functionalities and security features of the website. These cookies do not store any personal information.
Non-necessary
Any cookies that may not be particularly necessary for the website to function and is used specifically to collect user personal data via analytics, ads, other embedded contents are termed as non-necessary cookies. It is mandatory to procure user consent prior to running these cookies on your website.
SAVE & ACCEPT